Anybody having strange weather? It's the 21st of December....and 72 degrees. That's 50 miles SE of Memphis. As long as it doesn't spawn any wild weather.... I really can't complain.

You are lucky auntie, it rained 2 days in a row in Phoenix, cart path only for golf, high today 59 degrees.

Ah yes...Phoenix and rain...not a great combination.  There was a storm while I was visiting a friend...most of the yard of a neighbor ended up about two blocks down!!    That was one thing nice about Oregon growing up.  We never had erosion...it was like a big sponge.

Spoke too soon about the wild weather. We didn't get much more than rain and a little wind. Other parts of the MidSouth weren't so lucky. Parts of Mississippi and Arkansas really got hammered.

I remember the Columbus day storm 1960-plus, sleeping on the floor in the basement. I think that storm was a record for Portland, Oregon?

We were without power for ten days.  Not that much fun.  My mom and I sat in the car above the Clackamas River and watched a cabin float by...then a ranch style house...broken in the middle.   A neighbor was trying to get his herd of dairy cows through water to high ground.  No access to the milking machines... a bunch of unhappy ladies.

kipissippi wrote:Anybody having strange weather?  It's the 21st of December....and 72 degrees.  That's 50 miles SE of Memphis.  As long as it doesn't spawn any wild weather.... I really can't complain.

We've had a lot of snow followed by freezing rain. We have missed the worst of it where we are (but now have a heavy snow warning for today). Airports in Toronto, Montreal and Ottawa are nightmares on the busiest travel weekend of the year (equivalent to US Thanksgiving weekend).

My 90-year-old mother and brother flew out a couple of days ago when all this started. Fortunately, all they got was delayed by a blizzard in Calgary and had to take a connecting flight out of Toronto an hour later than scheduled. Fortunately, it was a big 767 going to Ottawa and on to London with lots of empty seats.

Our dogs are going crazy because the snow is two feet deep with a one-inch crust on it from the rain. When they break through, they have a heckuva time getting going--especially, the little whippet. He has cuts on his legs from the crust!

Why do we live here?

I have never understood why people choose to stay in a place where ice and snow are the constant. I prefer variety.  If you have the ability and can move please explain why you stay?

You really think ice and snow are "constant" in Toronto? While I wouldn't live there on a bet, they do have about 7 months of the year without ice and snow.

Maybe he meant "constant" as in every year for three months?
I grew up in Connecticut where winter was three solid months: December, January and February. However, November was often cold, dreary and sometimes had snow. March could also be cold and blustery more days than not. June, July, August were most often hot, humid and very buggy. That left April, May, September and October for generally lovely weather. As a young adult, I did the math--and moved to California.

espíritu del lago wrote:I have never understood why people choose to stay in a place where ice and snow are the constant. I prefer variety.  If you have the ability and can move please explain why you stay?

Actually, we did try to move to the west coast this year but we found we would have had to take too big a drop in housing standard. (But the weather out there is also constant--constant rain!)

This area is actually pretty good most of the time--and certainly ice and snow are not "constant." Lady Otter's description of New England weather pretty much describes things here, too. It's certainly a lot better here than the Prairies where I grew up. The bad weather started in many years in October--and always in November. I remember my days in the Army contingent at university in Edmonton standing on parade every year on November 11 at -20F or worse. Frozen ears guaranteed, as we had no winter hats in those days. That meant six weeks of blistering, peeling and itching!

The difference between east and west is pretty clear when I recall when my wife first moved west from Ottawa. She wondered why everybody had plugs hanging out of the fronts of their cars! For those that don't know, those are for block heaters. This was before the days of heated garages being common. If you didn't plug your car in over night, you weren't going anywhere in the morning!

Climate change has had favourable impact on winters since then. Not quite so bad there now. But, then, they've been hit at the other end. My mother and brother live in High River and lost everything in the massive flood last summer-- and I mean EVERYTHING in the basement (emptied and stripped back to the studs).

To my way of thinking, when discussing weather people are often prone to false assumptions and generalizations. Only natural since most of us have preconceived ideas at to what it must be like if someone says it is snowing or it is raining. The great equalizer can be the sun since it affects our moods. I find that if the sun is out, I can live with all sorts of conditions.

Since we happen to live here, I will use Albuquerque as an example. Friday night, we had our third snow of the year. Like all of the previous snows, the roads were melted off by noon and we racked up another of our 300+ days of sunshine per year. While we have four definite seasons, we don't find any of them to be very extreme. By the way, they are predicting 65 degrees and sun for Christmas Day. I may have to dig out my shorts?

There is no good "year round" climate anywhere in Canada which was the number two reason we relocated to the highlands in México. It is also probably the reason that more Canadians than Americans continue to move to this area despite the negative news reports about Mexico.

I found I was cold, yea I said cold when I was in Ajijic/Chapala in the rainy season and cold in the winter. My body is used to hot, likes hot. I was only comfortable in May, June, and July in Mexico. I imagine that's why so many Canadians love the area and Texans are called sun birds.

Here in San Diego we have had an unseasonal stretch of Santa Ana. Dry, warm winds from the east that leave your skin feeling great and your nose begging for humidity. 80 degrees at the beach and 45 degrees at night in the valleys. I work graveyard and leave home in nearly a sweat and return freezing my butt off. 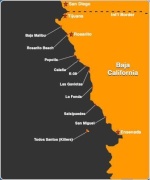 A lot of tourists in Puerto Vallarta - apparently 50,000 additional airline seats have arrived there over Xmas week! Cloudy but warm (high 70's, low 80's), whales in the bay.

Here's a link, with another link to the original in Spanish
http://pvangels.com/news/2025/added-flights-necessary-for-incoming-tourists-to-vallarta-nayarit

Well here in Chapala the weather has been cold and rainy. Low of 50 and high of approx. 57-59. Normal rainfall in Dec. is 0.4; however to date we have had two inches.  I am wearing a sweatshirt, hoodie, ski cap, jeans and socks and I'm sitting in my living room.  Reminds me of four years ago here when we had a cold spell. Enjoy your warmth. Oh, I forgot, also wearing gloves.

25c/20c in mazatlan where we are heading lunas