Wives are having sex with their husbands because they can't afford batteries.

People are getting a pre-declined credit card in the mail.

A stripper was killed when her audience showered her with rolls of pennies while she danced.

Someone saw a Mormon polygamist with only one wife.

If the bank returns your check marked "Insufficient Funds," you call them and ask if they meant you or them.

McDonald's is selling the 1/4 ouncer.

Parents in Beverly Hills fired their nannies and learned their children's names.

My cousin had an exorcism but couldn't afford to pay for it, and they re-possessed her!

A truckload of Americans was caught sneaking into Mexico.

A picture is now only worth 200 words.

When Bill and Hillary travel together, they now have to share a room.

The Treasure Island casino in Las Vegas is now managed by Somali pirates.

Someone who was so depressed and thinking about the economy, wars, jobs, my savings, Social Security, retirement funds, etc., called the Suicide Hotline. They got a call center in Pakistan , and when they told them they were suicidal, they got all excited, and asked if I could drive a truck.

The flood of American liberals sneaking across the border into
Canada has intensified in the past week, sparking calls for
increased patrols to stop the illegal immigration. The recent
actions of the Tea Party are prompting an exodus among
left-leaning citizens who fear they'll soon be required to hunt,
pray, and to agree with Bill O'Reilly and Glenn Beck.

Canadian border farmers say it's not uncommon to see dozens of
sociology professors, animal-rights activists and Unitarians
crossing their fields at night. "I went out to milk the cows the
other day, and there was a Hollywood producer huddled in the
barn," said Manitoba farmer Red Greenfield, whose acreage
borders North Dakota . The producer was cold, exhausted and
hungry. He asked me if I could spare a latte and some free-range
chicken. When I said I didn't have any, he left before I even
got a chance to show him my screenplay, eh?"

In an effort to stop the illegal aliens, Greenfield erected
higher fences, but the liberals scaled them. He then installed
loudspeakers that blared Rush Limbaugh across the fields. "Not
real effective," he said. "The liberals still got through and
Rush annoyed the cows so much that they wouldn't give any milk."

Officials are particularly concerned about smugglers who meet
liberals near the Canadian border, pack them into Volvo station
wagons and drive them across the border where they are simply
left to fend for themselves.

"A lot of these people are not prepared for our rugged
conditions," an Ontario border patrolman said. "I found one
carload without a single bottle of imported drinking water. They
did have a nice little Napa Valley Cabernet, though."

When liberals are caught, they're sent back across the border,
often wailing loudly that they fear retribution from
conservatives. Rumors have been circulating about plans being
made to build re-education camps where liberals will be forced
to drink domestic beer and watch NASCAR races.

In recent days, liberals have turned to ingenious ways of
crossing the border. Some have been disguised as senior citizens
taking a bus trip to buy cheap Canadian prescription drugs.
After catching a half- dozen young vegans in powdered wig
disguises, Canadian immigration authorities began stopping buses
and quizzing the supposed senior-citizens about Perry Como and
Rosemary Clooney to prove that they were alive in the '50s. "If
they can't identify the accordion player on The Lawrence Welk
Show (Myron Floren in case you could not remember) we become
very suspicious about their age," an official said.

Canadian citizens have complained that the illegal immigrants
are creating an organic-broccoli shortage and are renting all
the Michael Moore movies. "I really feel sorry for American
liberals, but the Canadian economy just can't support them," an
Ottawa resident said. "How many art-history majors does one
country need?"

In an effort to ease tensions between the United States and
Canada , Vice President Biden met with the Canadian ambassador
and pledged that the administration would take steps to reassure
liberals. A source close to President Obama said, "We're going
to have some Paul McCartney and Peter, Paul & Mary concerts. And
we might even put some endangered species on postage stamps. The
President is determined to reach out," he said. The Herald will
be interested to see if Obama can actually raise Mary from the
dead in time for the concert!

I would be glad to kick in some Dom Perrier to go with that Cabernet to help get them up to northern Manitoba by the end of January. ROFLAO

... Rush annoyed the cows so much that they wouldn't give any milk.

I understand that listening to Rush also causes sterility in humans (just a rumor, mind you)! 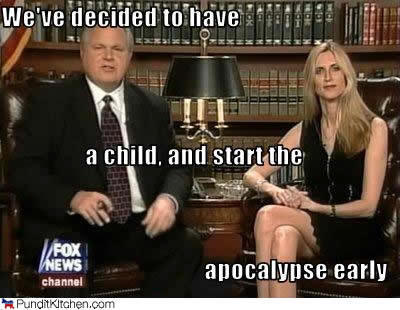