So here is my review, place is located at Providencia x Labrador. A first class operation. Get reservations as it fills up fast and seems to be one of the new trendy hot spots in Providencia. We started with an excellent tuna cream sashimi (80 pesos). She had the cream of tomato soup (80 pesos) and I had the chicken breast (140 pesos) which was great and for dessert creme brule (60 pesos) which was also superb. We had a few Absolut and cran (70 pesos) and Torres 20 brandies (150 pesos). Cost a bit over $1,000 pesos. Nice setting, I used to live a few blocks from there and my new office is a few blocks away. If you go to Guad, check it out.

Prices are approx, I wasn't remembering.

Could you explain "tuna cream sashimi"? I cannot begin to get a grip on what that might be.

It was diced tuna sashimi mixed with a cream sauce with leeks and some chilis served on toasted biscuit type bread.

No wonder I couldn't get a grip on the concept. Sounds like a "fusion adaptation" of using raw tuna while using the buzz word "sashimi". Not saying it wouldn't have been tasty but I think I would prefer using a high grade raw tuna for:
[img] 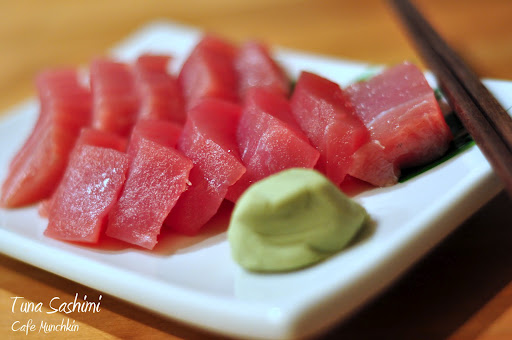 There is a really nice sushi place in Guad, called Suehiro, on La Paz with grills, etc. They have Japanese beer and lots of Sake. A good dinner for 2 will run a bit over $1,000 pesos but well worth it, the rest here is truly crap!!!!

[quote="Intercasa"]There is a really nice sushi place in Guad, called Suehiro, on La Paz with grills, etc. They have Japanese beer and lots of Sake. A good dinner for 2 will run a bit over $1,000 pesos but well worth it, the rest here is truly crap!!!![/quote]

The price is irrelevant. Do they have properly trained sushi chefs either of Japanese ancestry or appropriately trained by those having been properly trained at preparing this unique cuisine? Are we excluding the dreadful Guadalajara style sushi reminiscent of Taco Bell´s Americanized tacos in the United States? Very popular but atrocious concoctions. Represented, in the case of sushi as as commecrially prepared finger rolls comprised of cream cheese, rice and other innocuous ingredients of little interest?

Does an abundance of sake (a complex and varied libation rarely availabe anywhere, much less in Mexico) or Japaese beer, which can be quite pedestrian in quality, signal the abundance of fine sushi and its accompaniments? I think not. In all probability, a less than informed review not to be taken seriously. Dawg will try this Suehiro and report back so I´ll keep an open mind until then. Until then, I know precisely what to expect. McDonalds on rye.

The same could be said for any area that doesn't have an adequate ethnic population to support the particular flavor of the month. I would venture a guess that most "discerning diners" NOB don't know the difference between sushi and sashimi!

I am reminded (I can do this too, Dawg) of living and working in Seattle when a customer insisted that we go to the International District for "soul food". He happened to be a US born Japanese and had never been to Japan. Just after being seated in the neighborhood Japanese restaurant, he launched into a dissertation about his heritage and how I needed to understand how they did business. I let him ramble on telling me how things were and how I owed it to him to respect his heritage and revise our terms of doing business. I kept my mouth shut and didn't interrupt until he was finally done. At that point, I informed him that I had lived in Japan for six and a half years and not only spoke the language but also understood the ways of the Japanese. And that we were not going to revise our business practices or policies to suit him. End of conversation but he did call corporate and accuse me of bias.

Long story short, the restaurant became one of my favorites in the International District because they served truly authentic Japanese food!

Mexican sushi is shit plain and simple, fun how many sushi chefs in the US are Mexican. They put Philly cream cheese on so much. I love good sushi and have had it in many areas, in GDL it is lacking.

Actually offering sake and Japanese beer means they are at least trying! I got violently ill after eating at Sr. Sushi in Ajijic, the GDL place is consistently good, akin to the finest places in LA, Santa Barbara, New York, Las Vegas (Nobu) and Miami.

Bob, 1,000 pesos for two people. What a ripoff! Those are US prices and we're in Mexico where restauranteurs pay peanuts for rent, pay no wages to waiters and no taxes.

Mexican Sushi with cream cheese is why I don't eat it here. I agree with
Dawg. Eat Suchi where you hear Japanese at least for the head sushi
chef.

The Sushi at Suehiro is very good. The place has been owned and operated by the same Japanese family for over 40 years.

There is a great culinary scene in Guadalajara and one can dine very well. $1000 Pesos ($80US) is a bargain at places such as Lula Bistro and I Latina. NOB these places would cost at least double.

We dined at Suehiro a couple years ago on my son's birthday (his choice) after not having visited the place for quite some time. We were frequent visitors throughout the late 70s and 80s and enjoyed it very much.We were very disappointed on our most recent visit.
Not only the mediocre food and service
but also the decor and facilities seemed to be tired and worn.

Well dang, it's been a couple of year since I've been there too.