Any suggestions as to where to go for auto a/c repairs?

I second Escalera in Riberas.

He's very expensive, but if he has the right guy I guess it doesn't matter.

So is Escalera still the go-to guy for air-conditioning repairs. Unfortunately my compressor is no longer engaging. 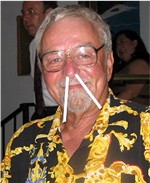 I took my Toyota to Dalton Toyota on Patria in Guad.
700 pesos for Computer analysis & install relay that cost 80usd in USA and 1100 pesos at Dalton
Total 1800 pesos . My compressor was not engaging,

I ended up going to Car City. They told me to come back at 5:00pm when the "AC Guy" would be there. I did that. He pressured tested both systems on my van (it has a rear system and front system) and found that both systems were sound but just needed a recharge. He recharged both systems and cleaned my cabin filters. Total cost $1200 pesos. Seemed like a great deal to me and the system works better than ever now.

As a side note, the compressor won't engage when the system pressure is too low hence the reason my compressor wasn't engaging any longer.

I'm glad you got good service at Car City, having heard nothing but horror stories about the place.

I had some A/C work done on a Mexican car at Car City and they rely on a guy to come from Guadalajara to do the work.  It kept losing a charge (leaking) and eventually found that it had an internal leak in the compressor. Took them three tries to figure it out so I am convinced that there is no good place Lakeside to have auto A/C work done.

The A/C in my NOB vehicle also died - broken high pressure pipe at the dryer.  Ended up taking it to Auto Clima on Gonzalez Gallo in Guadalajara as it was highly recommended on TOB.  They are located beside Total Tire on the left hand side going in (at Ejercito).  Very easy to get to.  They took the pipe off and took it somewhere to an expert in aluminum welding.  Took them 2 hours to repair, replace, recharge and test, all for only $850 MX.

Great bunch of guys and they seem to know what they are doing.  They were also working on replacing a pusher fan on a Beemer as well as repairing the A/C on a Kenworth while I was there.