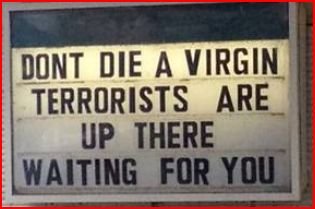 A refuse collector in Australia,
is driving along a street picking up the wheelie bins and emptying
them into his compactor.

He goes to one house where the bin hasn't been left out, and in the
spirit of kindness and after having a quick look about for the bin, he
gets out of his truck goes to the front door and knocks..

Being a kindly and conscientious bloke, he knocks again - a bit harder and
then harder still . .

Eventually a Chinese man comes to the door..

'I bin on toiret," explains the Chinese bloke, a bit perplexed.

Realizing the fellow had misunderstood him, the bin man smiles and tries
again.

"I dust been to toiret, I toll you!'' says the Chinese man, still perplexed.

Listen," says the collector. "You're misunderstanding me. Where's your
'wheelie' bin?'"

"OK, OK.." replies the Chinese man with a sheepish grin and whispers in
the collector's ear.

A guy is 74 years old and loves to fish. He was sitting in his boat the other day when he heard a voice say, 'Pick me up.'

He looked around and couldn't see anyone.

He thought he was dreaming when he heard the voice say again, 'Pick me up.'

He looked in the water and there, floating on the top, was a frog.

The man said, 'Are you talking to me?' The frog said, 'Yes, I'm talking to you.' Pick me up, then kiss me and I'll turn into the most beautiful woman you have ever seen.

I'll make sure that all your friends are envious and jealous because I will be your bride!'

The man looked at the frog for a short time, reached over, picked it up carefully, and placed it in his front pocket.

The frog said, 'What, are you nuts? Didn't you hear what I said? I said kiss me and I will be your beautiful bride.'

He opened his pocket, looked at the frog and said,

'Nah, at my age I'd rather have a talking frog.'