Getting in the Halloween Spirit

Getting in the Halloween Spirit

Police work must be entertaining as well as dangerous. Recently, a female police officer arrested Patrick Lawrence, a 22 year old white male, fornicating with a pumpkin in the middle of the night. The next day, at the Gwinnett County (GA) courthouse, Lawrence was charged with lewd and lascivious behavior, public indecency and public intoxication.

The suspect explained that as he was passing a pumpkin patch on his way home from a drinking session and decided to stop, "You know how a pumpkin is soft and squishy inside," he told the court, "and there was no one around for miles, or at least I thought there wasn't anyone around," he stated.

Lawrence went on to say that he pulled over to the side of the road, picked out a pumpkin that he felt was appropriate to his purpose, cut a hole in it, and proceeded to satisfy his pressing need. "Guess I was really into it, you know?," he commented with evident embarrassment.

In the process of doing the deed, Lawrence failed to notice an approaching police car and was unaware of his audience until Officer Brenda Taylor approached the side of his car. "It was an unusual situation, that's for sure," said Officer Taylor. "I walked up to Lawrence and he's just banging away at this pumpkin."

Officer Taylor went on to describe what happened when she approached Lawrence: "I had said, "excuse me sir, but do you realize that you're having sex with a pumpkin?"."

"He froze, and he was clearly very surprised that I was there. And then he looked me straight in the face and said, "a pumpkin? ****! Is it midnight already?"."

The court (and the judge) could not contain their laughter. The Washington Post wrote an article describing this as "best come-back line ever."

Re: Getting in the Halloween Spirit 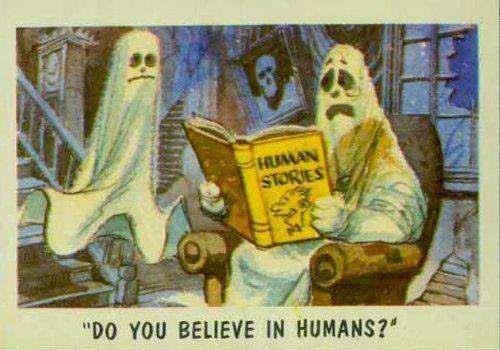