Internet and US Television Service

Internet and US Television Service

With NationPhone we an bundle our telephone service and won't need to go with Vonage. Since NationPhone does have television service through the cable, obviously having good internet service is necessary. I have heard internet service will vary based upon where you are located so if anyone has information specific to the Riveria Alta neighborhood, would be most appreciated.

Less than 30 days and counting down to arrival in Ajijic! Cheers.

You have two choices for internet:  Telecable - price depends on which TV Package you select, and Telmex.  Telmex costs ~ $600 pesos per month for phone and internet.

TV:  There is only Telecable for cable, no other choices.  You can get Shaw Direct satellite tv, price depends on programming.  Go to ShawDirct. ca for complete pricing.  Dish is and direct are available but require large dishes. There are multiple providers here.

If you are Canadian your best bet is to sign up for Shaw before leaving Canada and bring the equipment (dish, receiver(s)) with you.  The cost for equipment here is very high.

Cable bundle includes  phone, internet, and basic cable which does include four US channels and other in English if you turn SAP (supplemental audio programming). Internet speeds are 5,8,10, 15 for download.

Phone bundle includes  phone, internet, and optional Sat. service. Internet speeds are 3,5, and 10 if you are close  enough to the switch for 10. In my opinion DSL is faster setting up than cable so except for long downloads DSL feels snappier to me than cable but you have to be near the switch to get faster speeds.

Shaw Sat.   From Canada works well on two old birds. New bird does not work down here.  Best bet for English. I get Seattle stations from home and PBS in HD from Detroit. Works well on larger of two Shaw dishes. Smaller dish harder to align and goes out in dark clouds more. (hey its lucky it works at all. Leaky old Sats are good for us here).

DSS/Dish from US are very weak and require 8 ft dish and you won't get all the channels due to power problems and spot beaming. (expensive dish)

another newbie here. Been reading here for a few months and haven't seen much discussion about alternative sources for tv content. I've been using apple tv and like it a lot but am thinking I'll need a VPN router to use it in Mexico. Anybody use apple tv or one of the other options? 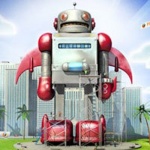 I stream all my tv and movies online and never pay a dime. Attack me if you want. I paid the outrageous cable fees NOB for decades for packages I didn't want to get one station. No more. No more faulty satellite equipment breaking down and waiting for replacements, no more weather outages. Carlos Slim can come arrest me any time, I don't care.

tabacone wrote:another newbie here.  Been reading here for a few months and haven't seen much discussion about alternative sources for tv content.  I've been using apple tv and like it a lot but am thinking I'll need a VPN router to use it in Mexico.  Anybody use apple tv or one of the other options?

I have two Apple TVs, one in the living room and one in the bedroom. I use UnblockUS to get NOB content @ $4.50/mo USD.

Telecable is not available in Riviera Alta. For internet you will have to use Telmex. I'm getting 5mb down and it works well.
I have been running a Slingbox from Dallas over the net for the last 3 yrs and that option works for me.
Just installed a VPN embedded on a router and that gives all devices ability to watch US netflix, YouTube, etc.
Also have a Shaw system for cable.

I download all of our favorite TV series & movies with Telmex DSL in West Ajijic, no problem. Consistent 1.0 Mbs download speed for $599 pesos a month even though I'm only paying for 5 Mbs. I then transfer my downloads to an external HD & play with a Western Digital Media Player. Works just like a DVD player with remote. Awesome.

There are FOUR not two sources of internet used lakeside, by far the most expensive and least used is www.hughesnet.com (satellite internet). It is used only by those who live so far out in the boondoggles that nothing else works.

Now the telephone company. Telmex offers not only telephone but ADSL (internet) they have slow and limited packages starting at less than $400 pesos per month, a middle package at $599 and there ultimate package at $999. In many places Telmex is the most reliable choice. In other places the signal quality and therefor internet speed sucks. They are also beginning to sell their own TV programs for streaming. Their fastest download speed offered but not always provided is hasta or up to 10 Mb/s

There is also Telecable, which offers not only analog and digital HD TV but internet. Their speeds are by far the fastest lakeside, but in many neighborhoods there are more outages than the competition. They have 4 packages in our area. The max download speeds are 8,10,12, or 15 Mb/sec. The also offer VoIP telephone service.

Now, the first internet system lakeside was Lagunanet. They started in 1997 three or four years before the competition, and later upgraded to fixed WiFi. Like all services, you either love them because they provide great service or you live in a marginal signal area, and have nothing but trouble and therefore bad mouth them. Their home office has moved from San Antonio, then to Ajijic, now in Jocotepec, closer to the owners home in Joco. Voip telephone also works. I don't know their speeds but they are slower than Telecable. For more information check out www.laguna.com.mx

They are in the process of moving their antennas to provide better coverage to more areas between West Chapala (not east) all the way to Joco.. Be careful now, I am a little bigoted as I used to give tech support there.

Satellite TV has already been covered. Remember, though, that you can not get all of the channels available up North on Shaw, DISH USA, or DirecTV USA down here. Also remember the size of the satellite dishes required in central Mexico, Shaw works great with their 75 E elliptical dish that measures only 36.5 by 26.5 inches while with DirecTV one needs an 8 foot (2.4 meter) Dish. With DISH USA to get many of the channels you need several larger dishes.

I could go on and bore you all to death

Pet, a slightly off-topic question about dish size. We just purchased a home in upper Riberas & will be installing Shaw. There are 2 dishes on the roof right now, a 4 ft. & an 8 ft. Both round dishes. Can you tell me if I'm better off using the 4 ft. or the 8 ft. will either work ok for HD? Thanks.

I believe that the 4 foot would work very well. you would need, of course, two what I call "Flashlight" LNBs one pointed and satellite Anik F-1r and the other at Anik F-2. At least that was the case 3 years ago when I was still writing Tech Talk for the Guad Reporter and keeping up with all things tech.

To make sure, check with your favorite local satellite dealer. In Ajijic I often use Ajijic Electronics at 766-1117. I like Mario best. There are other good dealers out there too.

Good luck. I love Shaw Direct (it used to be called Star Choice)

As Pete mentioned above (re: Shaw Direct), the two round dishes you have can be converted easily to make an excellent setup to receive signals from all of the SD and HD channels that are broadcast on the older two satellites that Shaw Direct uses, the Anik F1R and Anik F2.  You will need two of the "flashlight" LNB's as well as a 4x4 switch which are mounted on the dishes. These are readily available from the local satellite services companies such as CP Electronics in Guadalajara.  The dishes will need to be re-aimed, one at each of the satellites.  To get your dish settings, go on-line to a locator website such as www.dishpointer.com, select your location using the Google Maps plugin and select the satellite name.  The app will then give you the Elevation and Azimuth for each dish as well as the Skew settings for each LNB.  The 4x4 switch combines the signals from the two dishes and gives you 4 outlets for up to two PVR's (HDPVR630) or 4 standard receivers (HDDSR600). Depending on your existing setup, you may also need some additional cabling (RG6) to be installed between the 4x4 switch and your Shaw receiver(s).

If you need assistance doing this, just contact one of the local installers and they can come to your casa and do this for you.

Ezzie made some great points. However one can also use one parabolic, not elliptical satellite dish to point half way between Anik F1R at 97.3 and Anik F 2 which is at 111.1 West. Then by properly positioning the LNBs one can pick up signals from each of these satellites. (The flashlight LNBs are pointed at the satellite dish, one a little bit West of center and the other a little bit East of center.)

With DirecTV, for example, one can use a 2.4 meter parabolic dish pointed at the center satellite at 101 degrees West. Then with three LNBs pointed at this large dish they can picks up signals from three satellites located at 99.2 W, 101 W and 102.8 W.

It gets worse (or better) I have seen one oversized satellite dish with 6 or 7 LNBs pointed at 6 or 7 satellites at different directions.

Are you confused? You should be. You can learn more by talking to your favorite satellite dealer and/or by looking at www.cp-electronics.com to see pictures of these multiple LNBs