Any ideas of how to get this since CNBC won't allow it to any cable providers in Mexico? TIA

I would be a shame to miss that circus!

Yes,what David said.
It will probably be another train wreck,too bad we can't watch it.

Here's what one of the candidates had to say about the others:

John Kasich appeared in a pre-debate rally in Ohio on Tuesday. He was fed up. He appeared exasperated. He went ballistic in a section of his speech.
"Do you know how crazy this election is?"John Kasich said. "Let me tell you something. I've about had it with these people. Let me tell you why. We got one candidate that says we ought to abolish Medicaid and Medicare. You ever heard anything so crazy as that, telling our people in this country who are seniors or about to be seniors that we're going to abolish Medicaid and Medicare." Kasich was referring to statements Ben Carson made.

"We got one person saying we ought to have a 10% flat tax," Kasich said. "That would drive up the deficit in this country by trillions of dollars that my daughters would spend the rest of their lives having to pay off. You know what I say to them. Why don't we have no taxes? Just get rid of them all. And then a chicken in every pot on top of it." He was likely referring to statements made by Ben Carson, Ted Cruz, and Rand Paul.

"We got one guy that says we ought to take 10 or 11 million people and pick them up, where the—I don't know where, we're going to go in their homes, their apartments. We're going to pick them up and we're going to take them to the border and scream at them to get out of our country," Kasich said. "Well that's just crazy. That is just crazy." Of course John Kasich was referring to Donald Trump and his anti-immigrant stances and promise to deport 11 million immigrants.

John Kasich's explosion of justifiable disdain for what his party has become may seem bold to many. The reality of the state of the Republican Party makes his utterances likely fatal. He likely will not be the Republican nominee.

I don't know much about Kasich but he does seem to be the sanest candidate the GOP has.

Anyone bothered to read the media review today?

Train wreck was the most common one-liner 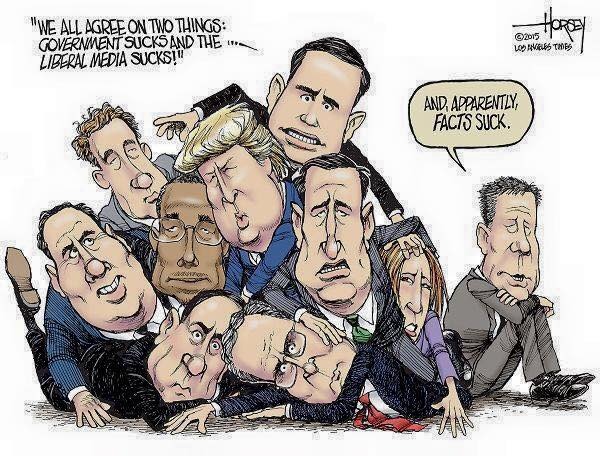 The media is hyping the contest to create interest in their particular medium.  Like saying Rubio is the new rock star because of his response to Bush's idiotic attempt to bring him down, even though Bush was correct.
Marco is too smooth for the old Bush wannabe.

I like the cartoon. It separates Kasich from the pack which I think is a good thing. The night was embarassing to the media and the candidates. For moderators they should just pick 3 people off the street 5 hours before the event and let them have at it.