Is it just me, or is this season unusually damp along with hot? Got the swamp cooler going this afternoon in the bedroom, but unlike earlier years when I surmise it was dryer, the swamp cooler (named C3PO, as opposed to R2D2, our heater for the cold months) is merely making the bedroom more muggy. SIGH! I am doing fine, as long as the cold beer holds out! Had to refurbish said beer this afternoon, so I drove to Corona in La Huerta plaza. (I also bought fruit at La Huerta, so don't laugh!)

I had a car closely hugging my bumper the entire way: a gold Humvee. I was not about to find out who the driver was. (I am a blonde expat and drive a Honda Civic, so the best thing I can say is that I am not likely to be perceived as a threat;) Assumed the driver of the other car was not an expat, to say the least. Just ignored him, figured he was a self-important narco, but...if this rings any bells, please let me know.

It depends on where you are getting the air from. According to the Chapala Weather station the outside air is 39% and earlier it was lower. If you get your air from outside the humidity is OK. If you are only recirculating the air in the bedroom, it will bet more and more humid and the more humid it is the less it will cool. in fact at one point it wont cool at all anymore,

Now just because the humidity is 39%, that doesn't mean it is that level outside where you live. I live a long way from the lake up on the hill and usually my humidity is lower. I presume that if you live closer to the lake it might be higher. Good luck.

And therein lies the problem with swamp coolers and the reason I installed a mini-split A/C in the bedroom instead.
A friend has theirs in the office. Pete's right about what happens in a room.

O, where's an Alp when you need one? 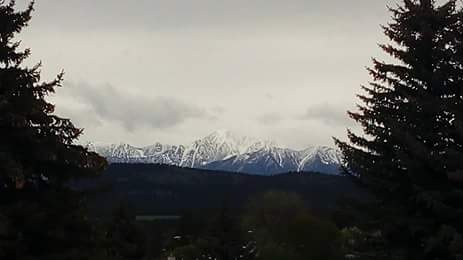 It was 90 degrees F on our terrazza at 9 pm last night and due to be hotter tonight.

Here in Duluth Minnesota it is 40 F. We miss Lakeside!

Oh, CB, enjoy the coolness! It is miserable here. I used to close up the house to keep the heat out around 1 or 2, now more like 10 or 11. ugggh Enjoy! In fact, you might want to stay another month! lol It is muggy this year, and everyday is a bad hair day. You, of course, don't have that . . .

I hate this time of year here, it's a small window of misery - not enough to move for - and for me it all culminates in the wretched 2 week SAT fiesta with it's all night loud "music", clogged, impenetrable centro, strange characters floating around the village, and the extra week or ten days it takes for the very last ride/puesto/whatever to pack up $hit and hele on their way. Every night I pray for rain and not just for the rainy season to start!

Our mini split a/c's are working at night. glad we have solar.

Gingal Good news. There are units that bring in the air from outside and cool it before it enters the house. I have had three evaporative coolers over the twenty years I have been down south two were rooftop units and one was a window mounted unit. So that I could bring in the dry air from outside, cool it and deliver cooler air to the interior of the house. Although I have an inside unit as well, I never use it anymore, Because it just doesn't work that well when it get's extra hot.

I had an A/C unit for about 8 years but I almost never used it because it used so much power and the evaporative coolers worked very well 99% of the time. So when I remodeled in 2007 I gave it away.

I'm enjoying it. Sure beats the freezing I did most of the winter. No complaints here.

I love it, we go early for a walk ,we have lazy afternoon and swim for a while everyday, I just love this time of the year ..