The building on the Ajijic pier

Here's the latest in the Laguna newspaper. This is English tanslation via Google, so use your common sense when reading.

THE PRESIDENT OF CHAPALA, ALEJANDRO AGUIRRE CURIEL, REPORTED THAT THE OWNER DOES NOT HAVE AUTHORIZATIONS FROM THE MUNICIPALITY

Sofía Medeles.- The controversial restaurant located on the Ajijic pier, which in recent weeks has seen staff working for an upcoming reopening, still does not have the necessary licenses to operate nor have they approached the Chapala authorities.

This information was confirmed by the municipal president, Alejandro de Jesús Aguirre Curiel, who assured that no business line has been authorized.

“So far, I am not aware that they have approached, but they do not have any license”, thus ruling out an early opening.

Contrary to this, in the last three weeks, there has been activity by workers carrying out renovations, along with a large billboard, which has information about the restaurant, which reads "coming soon".

These movements have generated controversy among the ajijitecos and caused contrary opinions, among those who do not agree with the restaurant, or with the premises, and those who see it as a source of work, a tourist attraction, and that it would be better occupied than abandoned.

The 34-year-old building is located next to the Ajijic pier, and was built there due to a concession granted by the National Water Commission (Conagua) to an individual. The owner of the site and the concession is Fabio Rizzo Jasso. According to him, the concession covers 3,362 meters, including a part of the boardwalk and the Parque de la Amistad, and is authorized for 50 years.

isn't it great that the people MIGHT have influence on what government does?

If it goes through, won't there be 4 Argentinean steak houses on the same street?

The Court of Administrative Justice ordered the Chapala city council to deliver a municipal license for the operation of the restaurant bar business located in the vicinity of the Ajijic boardwalk, after the owner Héctor Fabio "N" filed a lawsuit against the municipal government to take into account that there are no obstacles for removing the (previous) refusal.

The resolution was issued on June 20 with a favorable ruling (requiring) the municipality to deliver the municipal license corresponding to the year 2022.

Faced with this ruling, the municipality could file an appeal in the Superior Chamber of the Court.

A group of environmentalists and residents of Ajijic have spoken out against this restaurant bar, since it is located in the middle of the Ajijic boardwalk.

During the last visit made by this means, it was found that the property was remodeled and presents advertisements with job offers.

This dated yesterday from Seminario Laguna, translation courtesy of google (use your common sense).

Sofía Medeles.- The municipal president, Alejandro de Jesús Aguirre Curiel, reported that they will seek to challenge the decision of the Fourth Unitary Chamber of the Court of Administrative Justice of the State of Jalisco that commits the Chapala city council to renew the corresponding licenses for the operation of the restaurant “Barrio de Quilmes”, located next to the Ajijic pier.

After the favorable resolution to the demand of Héctor Fabio Rizzo, in an interview with Aguirre Curiel after the tenth session of the council held on June 28, he explained that they have not complied with the order and plan to resort to the appeal, so that he will be can give a better resolution to the case.

Despite not yet having updated municipal licenses to operate, the restaurant already offers job vacancies.

"Unfortunately, these are cases in which the magistrates give quick and clear resolutions, it is something that we are not going to allow," said the mayor, who also assured that they will work to reverse the court's decision.

The municipe added that the reason why this administration has not complied with the renewal of the licenses that the restaurant-bar needs to operate, is because it is located on federal land of Lake Chapala, in addition to the fact that it seems to him that it interferes with the attractiveness of the left side of the boardwalk.

Despite the legal dispute, the restaurant already offers job vacancies and, although it does not have an opening date, the remodeling work on the premises has not stopped for more than a month.

It was last week when the Court of Administrative Justice, through the official letter marked with file number 48/2008, forced the Chapala City Council to grant the municipal license corresponding to the endorsement of the restaurant-bar business; otherwise, public officials such as the mayor, trustee Gamaliel de Jesús Soto Pérez; the general secretary, Lilia Alvarado Macías, as well as the treasurer José Guadalupe Dueñas Acosta, to name a few, will be subject to a 36-hour house arrest.

The opening of a new restaurant on this site is controversial since, since its placement in 1988, it has not been well accepted by part of the inhabitants of Ajijic, who assure that it is an invasion and is outside of any type of concession.

For his part, the owner of the premises and the concession, Fabio Rizzo Jasso, who has already declared multiple times that he has permission from the National Water Commission (Conagua) for 50 years, and covers an area of ​​three thousand 362 meters, which not only cover the boardwalk, but also a part of the Friendship Park.

I for one hope he gets the license. It will be nice to eat there with a view of the lago. My guess is the other restaurants are fighting this as it would hurt their business. Especially Tango's and Cocinart.

rafterbr wrote:I for one hope he gets the license.  It will be nice to eat there with a view of the lago. My guess is the other restaurants are fighting this as it would hurt their business.  Especially Tango's and Cocinart.

Recent articles in Spanish language local newspapers report that locals have long been opposed to this structure since it was built.  These citizens are adamant that nothing is built in the federal zone at the lakefront; not just in this case, but all around the shoreline.

These are everyday working folks that have united and have been going after those who build fences or otherwise cut off access to the lake.  There have been many instances of these citizens tearing down walls and fences along the lake in Ajijic and San Antonio.  Protecting the federal zone is a very hot topic right now and the Presidente had no choice but to appeal.

While they may not welcome new competition, I don't think Tango or Cocinart are behind this fight.

Read the local Spanish papers and their FB pages also the FB pages of the groups fighting federal zone incursions.

I would like to see it either open for business or torn down. Having it sit there empty is the worst case scenario.

We eat out often, so I'm always happy to see a new restaurant.

However in this case, I'm siding with the locals. Their justified fear is that many lakefront property owners have already tried and continue to try, to close off access to the lake. Any 'win' to do this puts the entire lakefront in danger of being closed off to residents.

Yes, however this place isn't blocking any access to the lake. If the muni and those opposed are so convinced that this is "illegal" then I don't understand why they haven't torn it down like they are doing with other "illegal" encroachments. With enough manpower and equipment they could make it disappear in a weekend.
_________________
Vacation Rentals
https://casadecomo.webs.com/

This appears to be moving forward. There is an neon illuminated sign on the front now. This wasn't cheap. 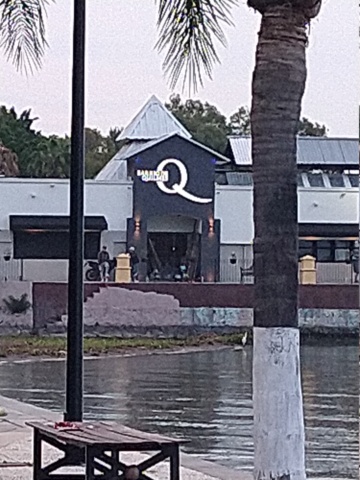 The Q restaurant at the end of the pier is now open. Apparently it is not really a steak house. It has a large selection of hamburgers, pizzas, pastas and salads. It is quite nice inside with lots of seating and a bar with a lake view.
_________________
Vacation Rentals
https://casadecomo.webs.com/