My big girl, Noulli the Bernedoodle, has real problems with cohetes. Just before the end of last eek I tried something I got at Pet Avenue called Calmante. I gave her two, they are made up as treats, and it did wonders for her. I thought I'd post that here so either a] might help some others, or b] someone will tell me that in a week her nose will fall off.

I believe up north it is Calmex, and the reviews are mostly it worked great or it idn't work at all. One dog had a bad reaction. According to Noull's weight she should have three, but I found two worked just fine. Next time I might only try one. 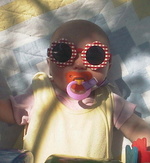 I have used Calmivet for years and It works great on Dog. It makes him look like he has been smoking Pot, I got them from Dr. Carlos Zavala. On Javier Mina behind the Bank. 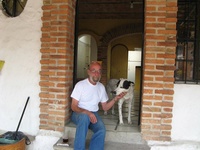 I used to use Calmivet too but I've found something i like better. Its not a sedative or a tranquilizer its an amino acid and pretty benign. Also very effective. You can get it at Ladron's, sometimes from Pepe, and sometimes from Dr. Daniel.

bought some yesterday , I ll see how it works on 2 of the dogs , if it does not work I will need valium for sure..