Poutine Being Confused with Putin

Poutine Being Confused with Putin

Nothing funny about the ongoing war, but this is odd yet amusing. 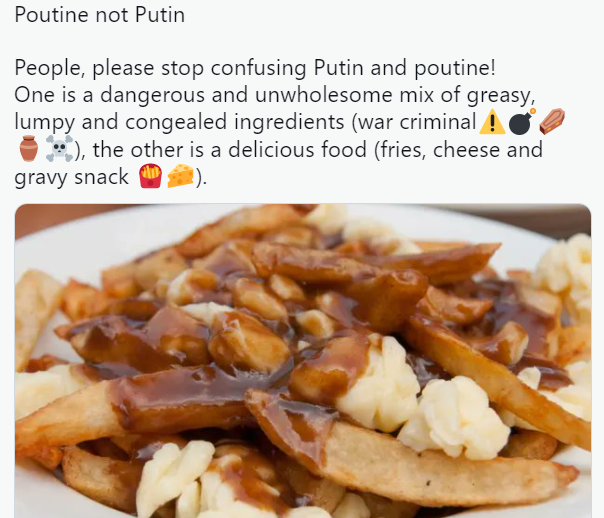 The story at WaPo

The proverbial fog of war can result in many misunderstandings, and in the ongoing Russian invasion of Ukraine, misinformation is rampant.

But people concerned about the conflict should at least be clear on one thing: Russian President Vladimir Putin, the architect of this bloody war, has nothing whatsoever to do with poutine, the beloved French Canadian dish of fries topped with gravy and cheese curds. This should seem self-evident, but some people have been conflating the two.

The French restaurant Maison de la Poutine, with locations in Paris and Toulouse, this weekend said it had been subjected to insulting calls “and even threats” by people apparently confusing the name of its signature dish — sometimes called the national dish of Canada — with the name of the increasingly isolated Russian leader.

In a message to customers posted on its social media channels, the company noted that its signature dish was invented in Quebec in the 1950s, with various tales surrounding its origins. “But one thing is certain: poutine was created by passionate cooks who wanted to bring joy and comfort to their customers,” the post stated.

“La Maison de la Poutine has worked since its first day to carry on these values and today brings its most sincere support to the Ukrainian people who are courageously fighting for their freedom, against the tyrannical Russian regime,” it continued.

The mix-up seems to have been prompted by the French spelling of the Russian leader’s name (as in a recent tweet by French President Emmanuel Macron in which he described a conversation with “Président Poutine.”)

Despite any similarities, the two aren’t linked: The origins of the name of the fries-and-gravy dish are murky, with some attributing it to a Quebecois slang word meaning “mess” and others to a riff on “pouding,” the French word for pudding.

George Bush Junior, genius that he is, once referred to then Prime Minister of Canada Jean Chretian, as Prime Minister Poutine.
And he wasn't trying to be funny.