Doc, short trip from the outside dryer Vent to the dryer. If I or my wife found one of these in the dryer would be totally freaked out ! Sorry it would have to go to Snake Heaven. Seems the ring rhyme might not work every time ?

agallardo70 wrote:Hello Doc, I am participating in a project to find out if the Chapala Milksnake belongs to the Jalisco Milksnake or it is actually a subspecies new to science.   Will you give us approximate location of the finding?  I would appreciate it!!

I've seen several, maybe the same snake, at the very top of Paseo Jacarandas, in Chula Vista, SAT.  Definitely not a Coral but I didn´t let it bite me.

Thanks slainte39; that is valuable info for the scientific community.

May we have contact via email?
agallardo at outlook.com

You are right Doc; probably a new subspecies evolved there.

Every think of doing a little research before you slaughter something? Snakes eat so many pests. A milk snake is harmless and a benefit. Knee jerk reaction.

Exactly; snakes are of great benefit; no need to kill them...

St. Patrick  didn´t kill them, he just drove all the snakes out of Ireland.
They left on their small boats. 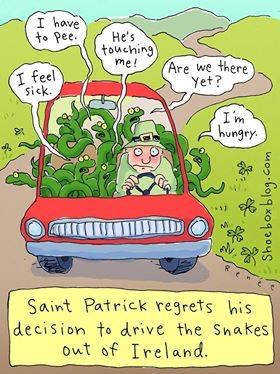 Prefer to stay away.

How Male snakes have reproductive organs called "hemipenes". Females have a reproductive tract located within their "cloaca". The cloaca is an opening found in both males and females, and also gets rid of liquid waste (urea) and solid waste (feces).

The snakes will approach each other, and if the female is receptive and willing then they will intertwine around each other and the males will invert one of his hemipenes (similar to a penis) into the female's cloaca. He will then release sperm that will fertilize the female's eggs.

That's pretty much it...kinda like any other highly-evolved animal. do snakes breed.

Now comes the question.....What is a snake omelet like. Same question we faced with crocks