Hurricanes happen. Earthquakes happen. Tornados happen. Floods happen. Best to not choose to live in areas where any of them can happen on a regular basis.

RoyD wrote:Climate change causing this is B.S. Just about every climatologist says so. The number and severity of hurricanes has not changed since they started recording them. Ditch the politics. This is a natural disaster of epic proportions and that is what it is. It is not political.

Pray for those who lost their lives, stupid or not.

Just about every climatologist says so? Care to back up your statement with your source for that?

It's you who thinks climate change is a political issue, not me. It's a scientific issue that affects all mankind.

And praying for those who lost their lives is up to you. I haven't seen any proof that would accomplish anything.

Some info for RoyD:
https://climate.nasa.gov/scientific-consensus/

Amen Ferret. That is my philosophy too.

RoyD wrote:Climate change causing this is B.S. Just about every climatologist says so. The number and severity of hurricanes has not changed since they started recording them. RoyD

ferret wrote:Hurricanes happen. Earthquakes happen. Tornados happen. Floods happen. Best to not choose to live in areas where any of them can happen on a regular basis.

Good luck with that! LOL!

Have to wonder if RoyD has ever bothered to look into a mirror and realize just how out of step he is with reality?

ferret wrote:Hurricanes happen. Earthquakes happen. Tornados happen. Floods happen. Best to not choose to live in areas where any of them can happen on a regular basis.

Good luck with that! LOL!

It's actually very easy if you do your homework.

Drought is about to happen in western United States. Theyd better start getting the hell out of there.

back in the old days people respected nature and did not build on barrier islands, when they built they would build wooden structures that could be reconstructed cheaply. Now people have insurrance and build on every place they can so they get blown away. Many do not want to evacuate because it is a pain and you may have to do it several times in the season so they get blown away and killed.. It is sad but at the same time,,, it is the way it is,,,
When we fist got married we lived near the mouth of a river , in the woods in Mobile Bay.. there were very few permanent structures, the lots were very large and the houses shacks. The house got blown away in one of the hurricane and now there are 5 houses where the old shack was, it is a question of time before they all get blown away..THe place is beautiful and people forget quickly but nature comes back with vengeance over and over. The sea is rising so many houses are very much at risk.. >That is the way of the world.
Maybe if there was no hurricane insurrance people would not build in risky areas or would have little beach shacks instead if expensive all year round houses.

They are building lakes and golf courses in the desert around Palm Spring and then will cry whern thre is no water, anither man´s foley..

They are building lakes and golf courses in the desert around Palm Spring and then will cry whern thre is no water, anither man´s foley..We do not respect nature and will lose every time..Maybe one day we will learn but just not right now..

RoyD wrote:Amen Ferret. That is my philosophy too.

I think you may have misunderstood ferret's post as meaning she thinks that man-made climate change is BS. Pretty sure you'd be 100% wrong on that.

They are building lakes and golf courses in the desert around Palm Spring and then will cry whern thre is no water, anither man´s foley..

Years ago when driving up through California, in the area southeast of SF, which is mainly ranchland and agriculture, there were signs everywhere protesting "Government-mandated drought", because they expected to be able to have water from the SF area, which was in contention.

It wasn't a "govt. mandated drought" at all, that was just a political dog whistle. That area of California naturally doesn't have enough water sources to sustain large-scale agricultural activity and cattle production. Yet humans feel entitled to do this and expect other areas to sacrifice their own water needs so they can carry on their business.

Owned a house in AZ for 10 years.  Don't get me started on how CA screwed AZ and others over the water flowing in the Colorado River.

That said: never seen so many water features on golf courses as I have in Phoenix!  And abundant water fountains and grassy lawns in residential areas there.

We lived in lil ole Bisbee at 5600' isolated from rest of AZ on the border with Sonora MX; we had a good monsoon season and a few decent snowfalls every winter.

This is the most graphic and terrifying flood water surge visual I have seen. Anyone who sees this and still thinks they're tough guys and will just ride it out and ignore evacuation orders has some kind of brain malfunction.

Interesting near the end how the wind shifts and the palms, which were getting blown from the ocean side, start blowing the opposite direction.

Would have been good to show a time-line of how long it took to go from a drivable street to what looks like the ocean.

Could save some lives in the future if this video accompanied all hurricane evacuation orders.

Excellent idea mudgirl. I have tremendous respect for the power of moving water and the damage that it can do.

While this wasn't a life threatening situation, I have a neighbor, an American from Oklahoma, (Trump supporter) who moved here a few years ago. The property he rented on a 10 year lease is on the flood plain of the arroyo just below me. The first summer he lived here, he spent days planting bamboo in May-June, before the rains started, creating berms which were mostly sand, keeping them watered, etc, just a few meters from the center of the then-dry arroyo bed.

I told him he was wasting his time, as it would all wash away in the first major rain when the arroyo would be a torrent (I've lived in this spot for 16 years).

He then man-splained to me how the bamboo roots would establish themselves, take firm hold and would be fine. I just shrugged and left him to it.

Not only did it all wash away in the first major rain, the arroyo tore through at least 15 meters past where he had planted the bamboo, littering his access entrance with huge logs and boulders.

Let's also remember that the reason these events are so catastrophic is not that they are more powerful but....  population explosion.

I remember when the population of Naples was around 4,000 and Ft. Myers just a bit more. Cape Coral and its 200,000 residents didn't even exist. Sanibel Island had a few wooden structures and a couple of seafood 'restaurants' and you had to have a boat or take a ferry to get out there.

Fast forward to today and the Naples area is a half million and Ft. Myers is 3/4 million. Wooden structures have been replaced by 15-story condos, barrier islands and low lying area are now fully developed.... but they are still only 3' above sea level.

So in the ole days hurricanes did come along but there was not much, other than Nature, for them to tear up. Today.... well with the tremendous population expansion in those areas when one comes along like Ian millions of people are made homeless or close to it and economic destruction is over the moon. Heard last night that it will be north of $50 billion.... and that is probably low.

I have pictures of Gulf shores without anything but sand now it is a wall of condos. ripe to be torn up and destroyed as the sea rises and we get more or stronger hurricanes

Population explosion has some bearing, but there is also an "I can have anything I want, because I can afford it", whether it makes sense or not mentality. Only the wealthy can afford to build or buy nice homes right on the beach in most places, certainly in the US. Not acknowledging that this isn't a bright idea if you build in hurricane alley, or somewhere that could be prone to flooding.

If there was no insurrance in those risky areas, people would not build.. 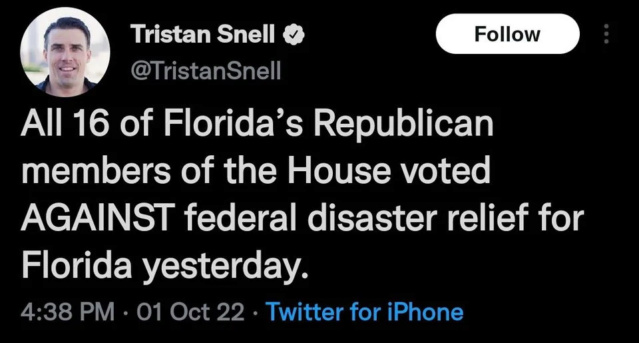 I was talking to a former resident of FL. He told me that Homeowners Insurance rates in FL are 3x the norm. So many people cannot afford Flood Insurance too.

Rory2u wrote:I was talking to a former resident of FL. He told me that Homeowners Insurance rates in FL are 3x the norm. So many people cannot afford Flood Insurance too.

Owned a home in Flood Zone AE (1 block from a bay).  Was not required to buy FEMA flood insurance (no mortgage) but stupid not to since premium was relatively low ($1500 per year in 2014).  We challenged the FEMA flood map designation and won!  But we kept buying flood insurance, at the reduced rate of $475 per year.  In 2014 FL housing was much cheaper; our purchase price was within FEMA max coverage of $250K per house.  As housing prices soared, we were forced to look for private flood insurance...ouch!!  It was a major reason in deciding to sell.

ALL FL insurance is high--not just home owners; our car insurance on same car moved from AZ more than doubled.  Our home insurance premium was around 6K; our 1940's little cottage had wooden single pane windows and not much wind mitigation for the roof.  We were lucky to find an insurer, frankly.

FL politicians hype FL's lack of an income tax, but the insurance burden wipes out that incentive.  Local taxes are quite high too.  Localities need money to pay the bills; if there's no revenue sharing from a state income tax, then it's funded by property taxes.

The Federal government did try to make all homeowners in flood zones pay more of the real cost for insurance and to ban homeowners from re-building a 2nd time after a flood claim on same property.  Congress passed the Biggert-Waters Act in 2012 and it was signed by President Obama.  But once it took effect and premium notices were sent out, all hell broke loose and in 2014 it was severely amended; it grandfathered in existing home premiums and zone protection, put caps on further increases and deleted the re-building ban.