So intriguing, I am copying the entire story here as it may not be visible to non-subscribers.

MEXICO CITY — The soldiers are buried next to a traffic-infested highway, across from a skate park and a shop selling mufflers. Their common grave is marked by a single white tombstone.

“To the honored memory of 750 Americans, known but to God,” it says in English.

Visitors who stumble upon the U.S. National Cemetery, a manicured, one-acre patch of green in the sprawling Mexican capital, use a different word to describe them.

“A lot of people ask, ‘Why are the invaders buried here?’” said Miguel González, the cemetery’s administrator.

The United States has invaded Mexico at least 10 times since 1806. In 2020, President Donald Trump reportedly considered an 11th. More than half of what was once Mexico now lies within the United States.

The unidentified soldiers who are buried here invaded Mexico around 1846, during the Mexican-American war. Their bodies have remained here ever since, as the two countries have alternated between being allies, enemies and, eventually, something in between.

López Obrador is fond of quoting one of his predecessors, the turn-of-the-century strongman Porfirio Díaz: “Poor Mexico. So far from God, so close to the United States.”

If there’s any place in Mexico that channels the oddness of the bilateral entanglement, maybe it’s the American cemetery. The oldest of the 26 military cemeteries overseas owned and administered by the U.S. government, it’s one of the few outside of Europe.

It is open to the public, but few beyond its immediate neighbors know it’s here.

Often, when visitors show up, González will walk them around the periphery, pointing to the names on the crypt walls. In addition to the 750 unknown soldiers, the cemetery holds the remains of 813 other Americans — Civil War veterans, U.S. diplomats and their children.

“We’ve got two Confederate generals,” González said on a recent tour, pointing to the grave of one. “The war ended and they moved to Mexico.”

U.S. Army veteran and FBI retiree Miguel González, 52, is the cemetery’s administrator. (Luis Antonio Rojas/For The Washington Post)
Another timeless trope of the bilateral relationship: the American fantasy of retiring to Mexico.

González continued with his tour. He pointed to the tomb of John H. Smith, one of the Buffalo Soldiers, Black service members dispatched to control Native Americans and cattle rustlers. There was the tomb of Aaron Burr (not that one). There were veterans of the Spanish-American War and others who died in the Mexican-American War.

That incursion is described in a pamphlet at the cemetery’s entrance.

“The USA’s westward expansion in the early 19th century created contention over territory claimed by Mexico,” says the flier, published by the American Battle Monuments Commission. “When Texas became a state in December 1845, Mexico severed diplomatic relations. President James K. Polk ordered Gen. Zachary Taylor’s forces into the area near the mouth of the Rio Grande.”
Before González moved here last year, that war was a blurry recollection from high school history class.

Born in the Mexican state of San Luis Potosí, González migrated to the United States with his parents when he was 11. He went to high school in Chicago, where he was relentlessly bullied for his accented English.

When he was 19, he wandered into a U.S. Army recruiter’s office out of curiosity. It would be the start of a 21-year career in the military, including tours in Iraq and Afghanistan. After his retirement from the service, he went to work for the FBI. When he was approaching his retirement there, his colleague mentioned a job in Mexico City as the administrator of an American cemetery.

It turns out that the battle monuments commission, a U.S. government agency, keeps one employee in Mexico to oversee the cemetery. The job comes with a residence adjoining the burial ground and a full-time security guard.

“The first thing I did was I called my friend in Mexico City and I asked, ‘Isn’t that place dangerous?’” González said. “All I’d heard about it was cartels and kidnappings and disappearances.”

Even as a Mexican American, he had come to embody another trope of the bilateral relationship: mutual misunderstanding.

“I got here and realized that this place is amazing,” he said. “I’m not sure I ever want to go back to the U.S.”

He made some changes — long overdue, he thought — to the cemetery. He added a Mexican flag, which now flies next to the American one. At events — on Veterans Day, for example — he plays the anthems of both nations.

In a cemetery so small, it can be hard not to overhear visitors’ reactions.

They stole half of our country, some say.

Why do the gringos get to own a piece of Mexico City? others ask.

González, a short man with salt-and-pepper hair and a wide smile, sometimes approaches them gently.

“It’s a complicated history,” he says, realizing he could just as easily be referring to his own binational status. “Sure, the U.S. invaded, but they got tired, and they retreated.

Which is where, exactly?

It’s as easy to find a Starbucks in Mexico City as anywhere in North America. Home Depot delivers. So does Walmart. The two countries do roughly $1 million in trade per minute.

Last month, the Miami Heat played the San Antonio Spurs in front of a sold-out crowd at the Arena Ciudad de Mexico. This month, the trial of Mexico’s former security minister, Genaro García Luna, who is accused of colluding with drug traffickers, began in New York.

Migration from Mexico to the United States has picked up again. Some Mexicans are fleeing crime and displacement. Some are looking for higher wages. Others are drawn by the ineffable — the mystique around a place so close, but so unfamiliar.

One of the cemetery’s two gardeners, Maximiño Saldaña, 63, has worked here for 20 years, trimming the towering palm trees and the bushes that line the crypt. Partly in recognition of his work tending to America’s war dead, the U.S. government offered him a green card. Next year, he will move to Costa Mesa, Calif.

González was surprised when he learned of Saldaña’s plans. Most people are decades younger when they leave for the United States. But the answer was simple, Saldaña explained.

That’s amazing. I had no idea there was such a thing. Thanks for posting this. I’d love to visit it.

Super interesting article. Thanks for posting it. I googled to see where it's located. Would be really easy to visit, north of El Angel and not far from the monument to the Mexican Revolution. Pretty grounds. 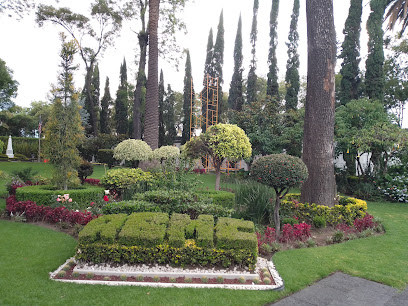 Similar topics
» Fascinating...
» Funny Story of the Day (For Me)
» Fascinating new pain med...
» I found this article fascinating
» Another sad story